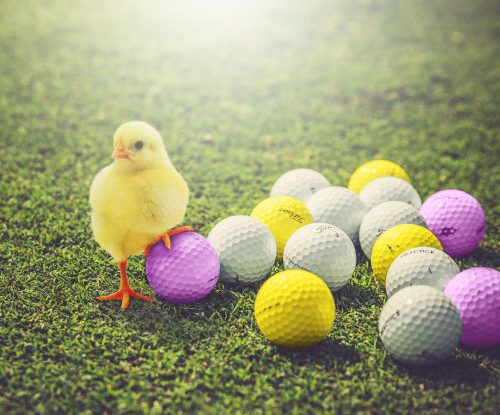 The sound of spring is in the air and the course is starting to show its face from under the snow. The last few days the snow has been melting extremely fast and now we’re being to see green patch on the high spots of the course. The winter gave us a lot of snow, up to 70cm on green number 4, but it’s been kind to the course as the temperatures were low and stable.

Not a lot of days with plus, minus fluctuations causing ice which will always benefit the grass. As of today we’re averaging around 10cm snow but up to 30cm in the more shaded areas, tees on hole 3 and 5 for example.

The all important greens report! Well, I can say we have come out of the winter very well all greens looking good, a few disease scars here and there but nothing to worry about. The only green not on the same level as the rest is 18, it’s come out ok but we’ll need a week or two under a growing sheet to help recover after the winter. This has been a problem green for me since I came to the club, mainly due to not being able to keep the profile dry enough in the autumn/winter before the ground freezes. The slope behind the greens is the issue with possible drainage issues under the green as well.

It’s something the club and I are talking about rebuilding, but we haven’t got much further that just that.

The pictures speak for them self, the greens have a nice colour to them, but still have a little sand on them from last years aeration in the autumn. This will soon grow out once the temperatures increase.

Can you guess which greens we have taken pictures off in the comment section? 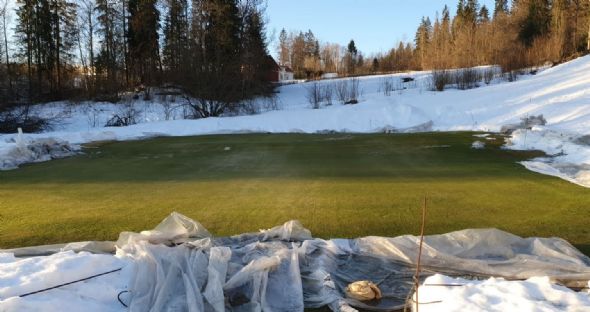 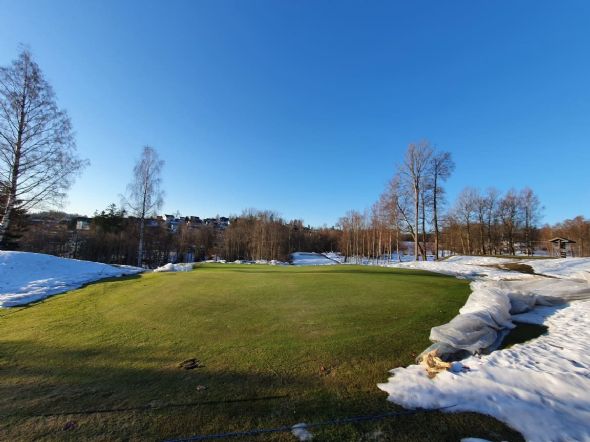 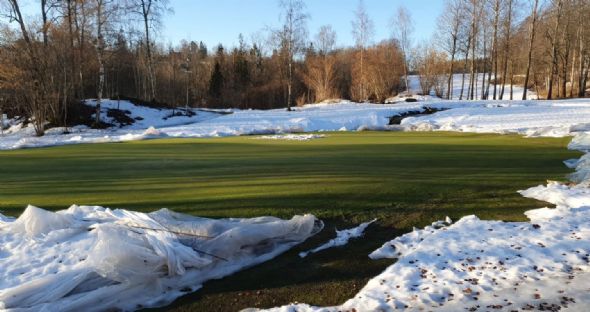 The tees are in better shape then they were last year and have benefited from the extra investment they got in the autumn. An extra fertiliser and two fungicide applications have meant that they come out of the winter with much less damage then 2020.

Work on the two rebuilt tees will start straight after Easter. The top sand layer, irrigation sprinklers and sand based turf will put down on the tees in the coming weeks. Obviously they won’t be ready for play as soon as the course opens, but hopefully sometime before the end of May is more realistic. There will be range mats places on these holes when the course opens.

Some of the small tees we had issues with last year will have a range mat on the them to begin with. After a 42% increase in play in 2020 and more than likely the same amount of traffic this year, I feel it’s best to give these tees a chance to get growing before they get some much traffic on them.

The ones that have come out of the snow look good, plenty of green grass and should be a nice starting point to begin the season with. Extra investment went into the fairways at the end of last season the same as the tees and I think we’ll see the benefit of that in 2021.


Lastly the Forrest areas around the course have taken a lot of damage due to the high winds over the Christmas period. We will start the clear up on these areas straight after Easter but we’ll also have help from our very active dugnads group that helps out every Tuesday.


When do we open?

I still have no opening date for you yet, but it’s safe to say they we’ll have good conditions from the opening day in 2021.

Hope you all have an happy Easter and I’ll have more information in the coming weeks.