Publisert 1. august 2019 av Matthias Gullberg
Are you tired of barely missing the green on number 4 and bouncing off the road and pass the white stakes?
Asle has you covered. Asle and the greenkeeper staff has just installed "kunstgress" on the road past number 4.
This means there will be alot more fair to hit long draws on this hole. 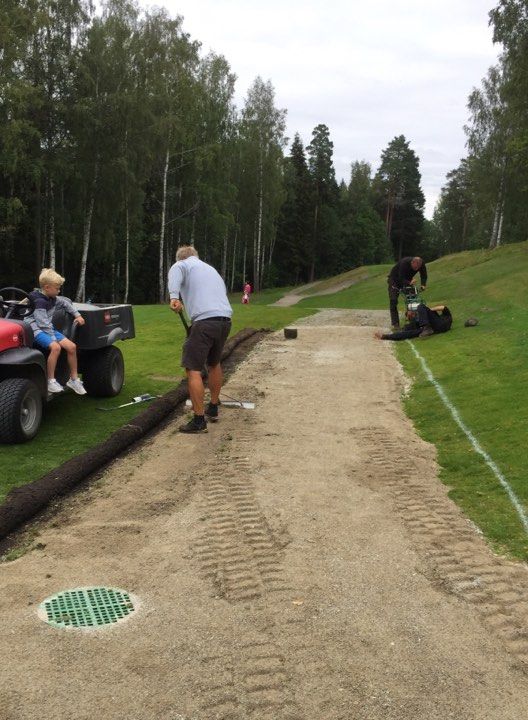 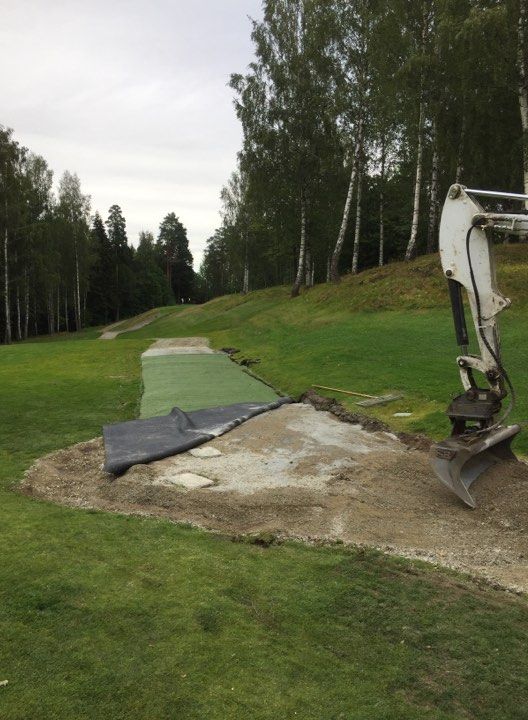 During july we have had some periods of drought with temperatures well over 30 degrees. This puts alot of stress on the grass and we saw the need to use water during the days. Its not easy since we have over 200 golfers every single day, but we were able to start up the irrigation system during specified times during the days. 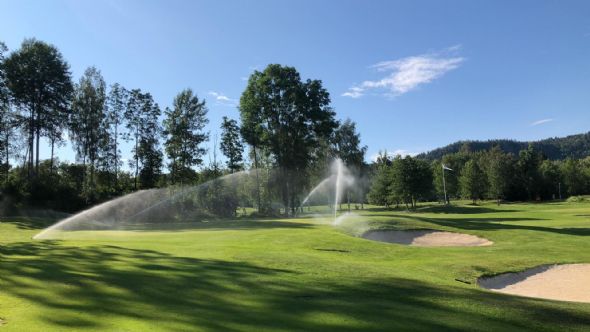 I hope everyone has had a well earned break and is ready to make the most of the rest of the golf season for 2019. July was a busy month for the boys on the course, with maintenance done to greens and tees, as well as the normal cutting program continuing. It been nice to see a lot of new faces playing Asker for the first time and plenty of the familiar faces that don’t seem to like to travel too far away from the course during the holidays either. I must say It’s always nice to see the course busy. During the last week of july we are preparing the course for tournament season in august. We have hired some ekstra personell to make up the finish around the course, cutting high grass and cleaning around roads.

Asker has had beautiful greens since we opened this spring.  In all polls we are ranked in the top of Norway when it comes to green quality. But during july it was our turn to start working on the much needed maintenance.

The maintenance on the greens took two full days. The process started with vertical cutting of the greens, which removes dead grass and organic matter from the surface. Next the excess matter was blown away and heavy sand dressing was applied next. Solid aeration tines were them used to open up the greens to help with gas exchange (oxygen and carbon dioxide), help with water drainage and increase root lengths. Overseeding was done before we dragged the sand dressing into all the holes All helping to give stronger, healthier greens. 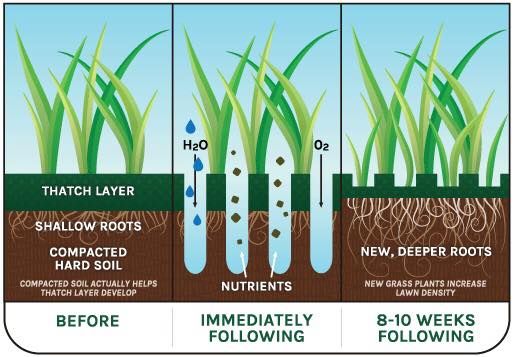 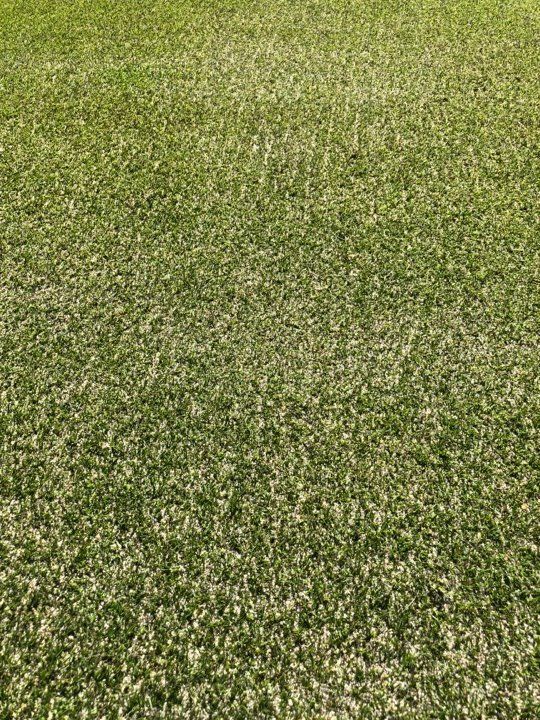 (good looking green after the work was done)

Some problems on green 7, 10 and 11.
It seems the larvaes that attacked green 11 last year is still here. This year we have 3 greens that has shown signs of this. What happends is that the larvas burrow out in the top layer og the green. You can see this by small piles of sand on the green. Unfortunately this pushes the grass aside and eventually leads to spots where we have missing grass. There are no known legal pesticide for these kind of larvaes, so we are trying different strategies of aeration, iron, and nematodes. We will see if it helps but so far the surface of these 3 greens might be slightly different then the rest.
On the front side of the number 10th green, some birds found out that there were larvaes in the green. The result was temporarily devastating as they pecked up a large section of green. (as seen on the picture). 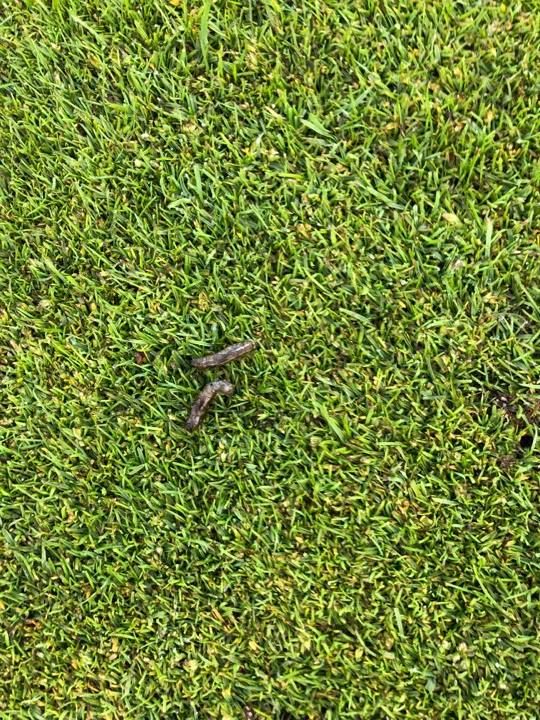 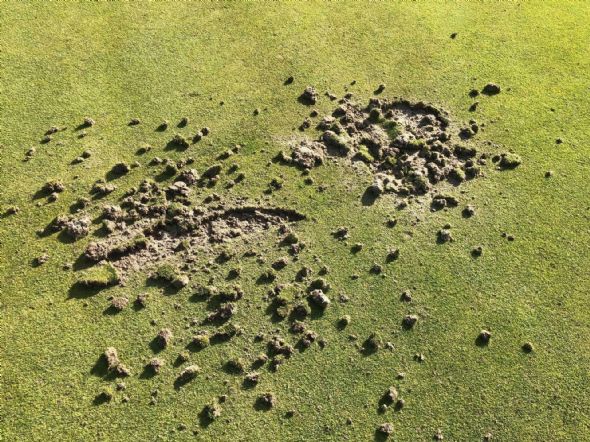 (A closer look at some larvaes who has come up from the ground left. Birds pecking the 10th green right)

Tees
The same process was done on the tees, with bigger solid aeration tines. The tees needed a lot more sand than the greens and a different type of seed which is more hard wearing. We have begun to put a new edge in the bunkers, this is quite a slow process but will bring them back to the right standard. August is one of our busiest month of golf, we’ll be looking forward to seeing you all out on the course. Best regards James and the green staff. 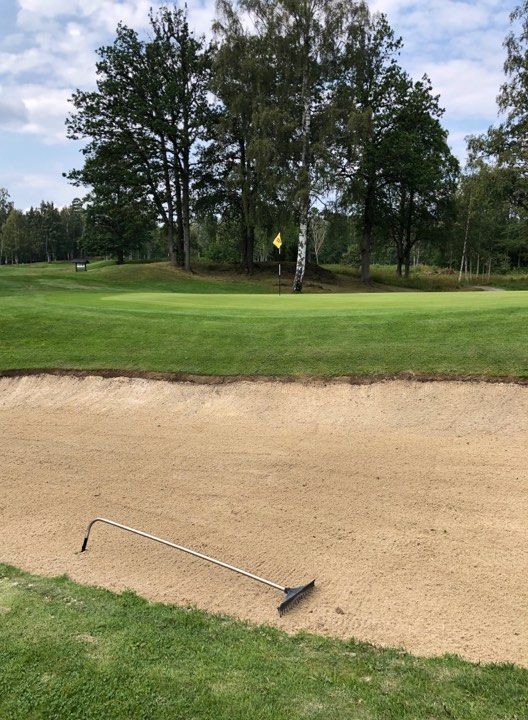 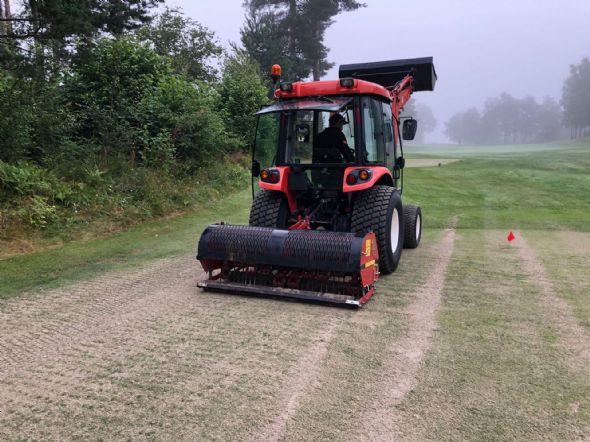 (Nice bunker edge left, Aeratio work on the tees to the right)

The team this week that has prepared the course for august was made up of the usual staff: 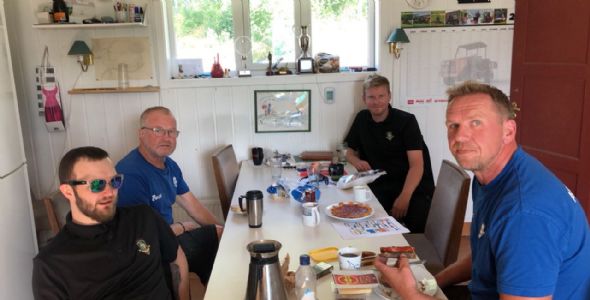 The dugnadsgrupp tuesday and thursday: 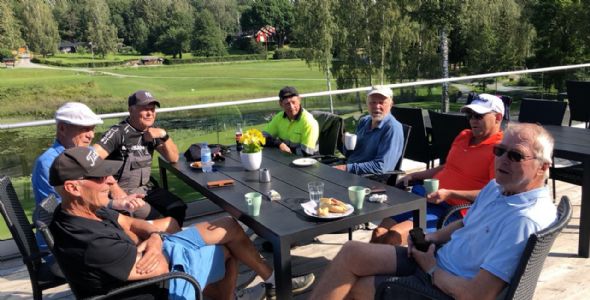 And the extra staff from Holtsmark: 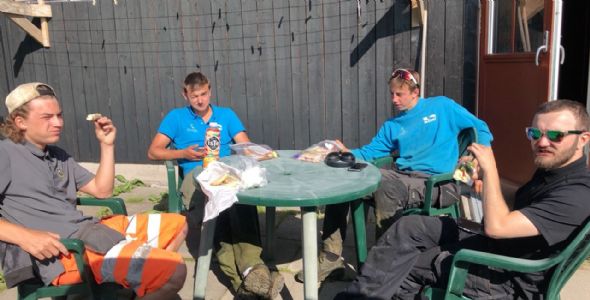 Extra:
During thursday the 2.8 when we were clearing bunker edges. We found these stones in the rught hand bunker on number 6 :O 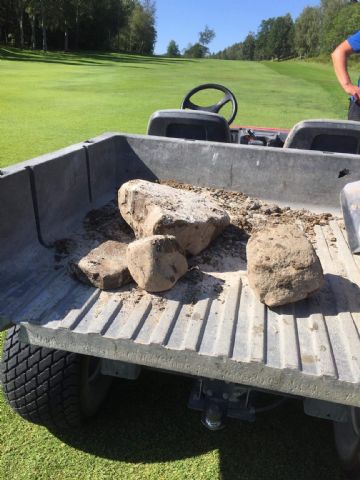