The season is in full swing, with lots play out on the course. I’m happy with the feedback we’ve been getting about the course from the start of the season but in the last 2 weeks the course has really started to bloom. 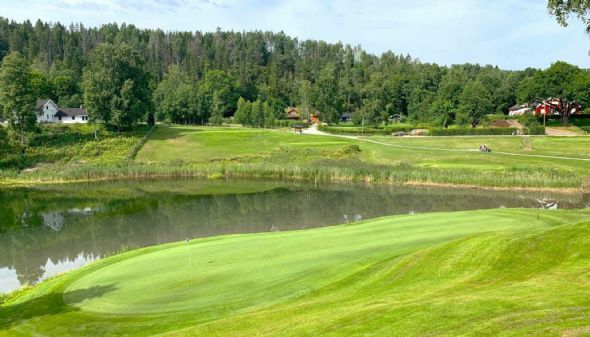 To keep the course in good shape we have to do maintenance on all the playing surfaces to keep them looking this way. Even if that is in the middle of the season. I chose to do it at this time, as it is when the course is at its quietest and so the grass can recover before the busy august/September period starts. In the end we had to close the course for two days instead of one due to 50+ mm of rain the day before the maintenance was due to start. Not easy to predict the weather when everything has to planned and agreed on 3 weeks in advance. 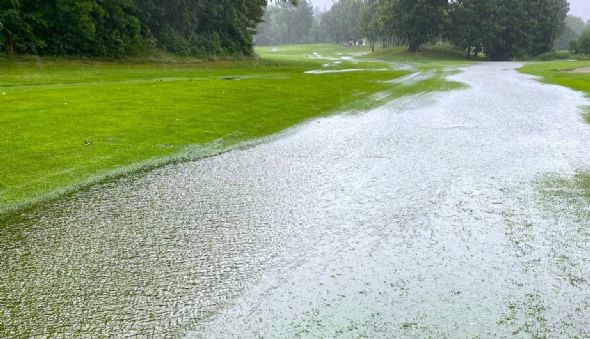 The stab has been working non stop this season and we are especially proud of all the work that was done during the spring, with new safety nets, drainage, the news trees on 7/13/11 and of course the new tee on 11.

For the 2022 season we also took in some extra help from Bosse Gunnarrson who"retired" in 2020. Keeping a greenkeeping team with alot of experiene is very important to us, and with more changes than normal this felt like a good move. Bosse is working on the course from june - august.

To this season we also hired a new head greenkeepers assistant. Arnie Skipper started in june and further boosted our team. Arnie has been in charge of the course during the summer, and has overseeen both the maintenance of greens and fairways in june as well as the recovery of the course up until the end of july. 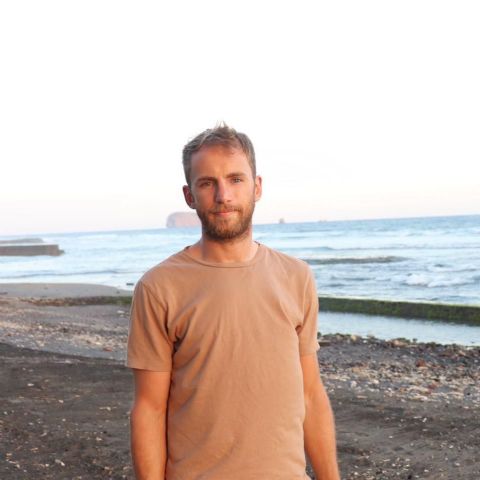 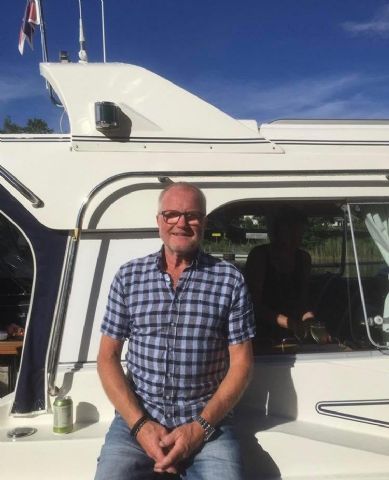 In july we also had an inspection from Dick Folkesson who was back in Norway for the first time in 6 years. Dick was the head greenkeeper at Asker for more than a decade.
He couldnt help himself and of course helped with the maintenance job :)
He was happy with the progression of the course and played 3 rounds during the weekend. 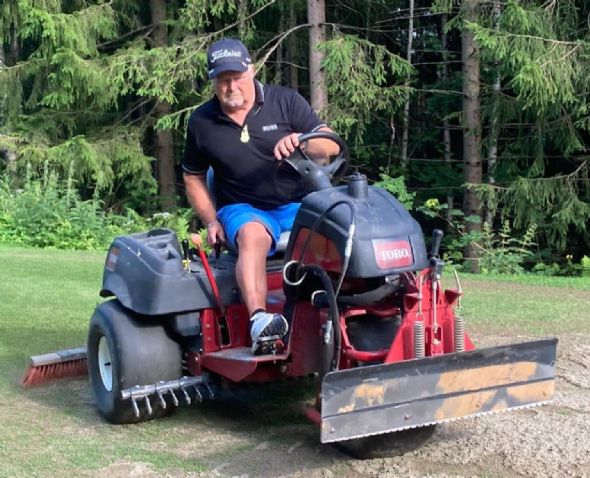 Dick Folkesson tending to the tees.

The greens were micro hollow-cored, over-seeded, fertilised and then sand dressed. The main objective of this process is to take out organic material(thatch) from the top centimetre or so and replace that with sand. This helps keep the greens firmer, helps with draining and creates a seed bed for new grass to germinate in. It’s essential that we introduce new grass each year as a young plant is stronger against stresses in summer and also the winter. I went quite heavy on the dressing, around 30 tons per hectare, but the greens were back to normal within a week of the job finishing which is a pretty good turnaround. 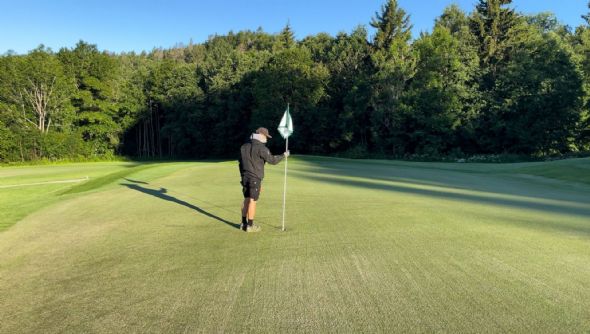 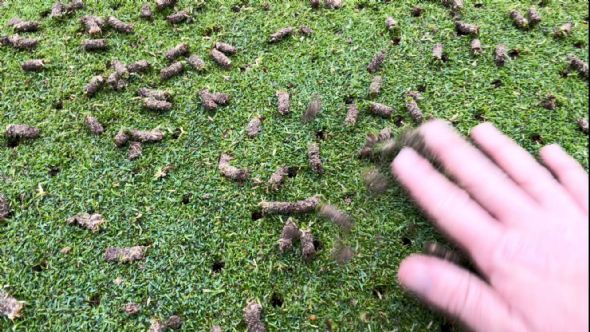 Plugs taken out fo the greens to prevent buildup of thatch. 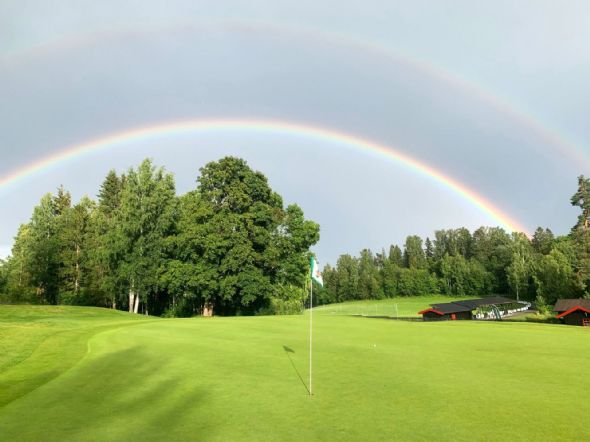 
Tees
The tees were aerated with 12mm solid times, seeded and heavily sand dressed. The aerating helps with gas exchange, mean getting more oxygen into the soil and also increases root growth. The sand (ca 50 tons) then filled in the holes and helps even out the tee surfaces.

The maintenance that we have done on the tees prior to this season and now in june has had a major effect on quality. The tees has been used frequently each day and especially our par 3 holes has seen more damage in the last 2 years. Its impressive to see that we have maintained such a high level on them this year.

Fairways
The fairways were aerated with 10mm solid tines going down to 7-8cm. I really would like to go deeper but the course has a lot of stones/rock under the surface and this includes the fairways. To go any deeper would only damage our machines and damage the grass. The weaker fairways had seed applied to them before the sand dressing (ca 400 tons) was driven out. The sand was then dragged in to the holes and within a week the fairways were being cut at 20mm. The process helps to give firmer, dryer surfaces and healthier grass to play on. Over time this will build up a good sand layer in the soil profile. Its really important that this maintenance is done every year to see the best results. Big thanks to Mads and his team from Holtsmark and Skaaret for supplying the sand. 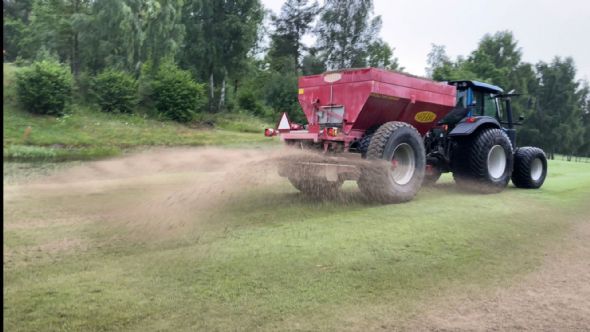 400 tons of sand on the fairways 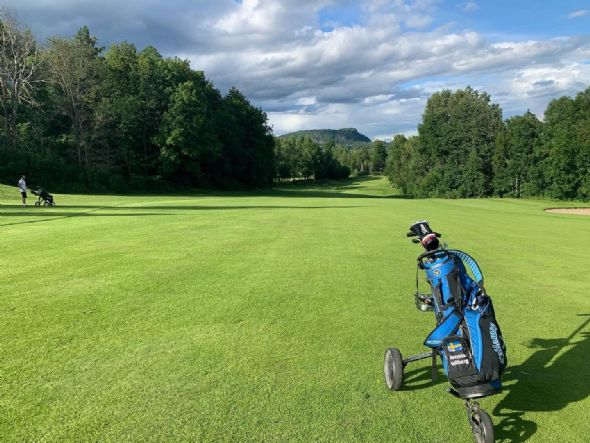 The result 2 weeks after maintenance

The road forward
August will be a month with alot of activities. We have Alexandergolfen, Srixon tour, NSG uttaksturnering, and of course the club championshiop looming ahead.  We therefore use these weeks in july to prep the course into the best shape ever. 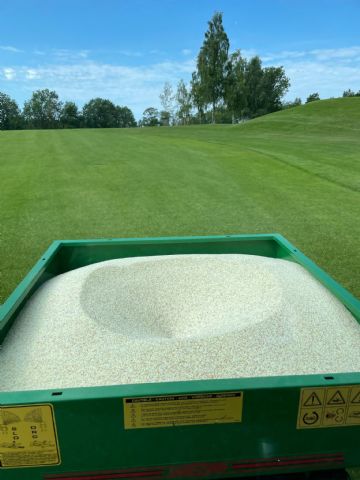 Fertilizer for the fairway

This week all the greens, tees and fairways have been fertilised. The lakes on holes 1, 3, 6 and 18 have be clean out and are free of water reeds and grass. We have started putting sand in bunkers that have need of it, 8, 10 and 13 spring to mind and we’ll carry on with that into next week. 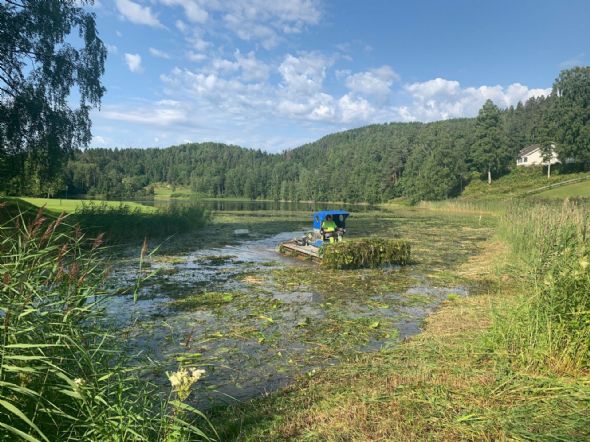 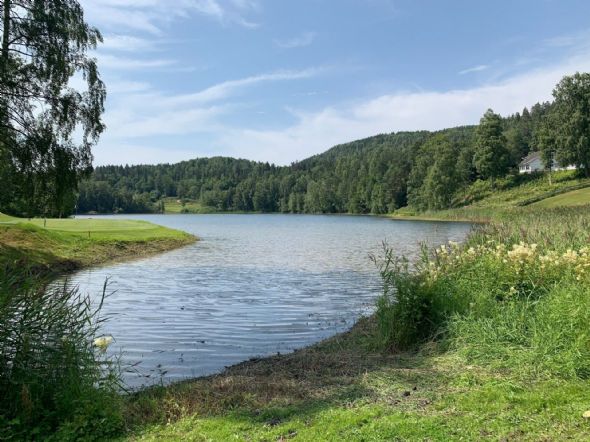 The heights on the tees (8mm) and greens (3.5mm) are back to normal summer heights. Currently the fairways are at 14mm but they will be down at 12mm for the start of august ready for Tournament season.

Hope you’ve all enjoyed your holidays and are ready for the best part of the summer out on the course.